The classic football season snack, this chex party mix recipe only has two ingredients in the seasoning mix and is beyond easy to make.

Recipes are like a big game of "Telephone." They're passed around as stories, shared via email or text, scribbled on napkins or, less likely —on monogrammed recipe cards. This chex party mix recipe personifies the Telephone Game. Passed down to my husband from his mom (from who knows where), our family's homemade cereal mix recipe was recently communicated over the phone to me as "handfuls of this and so many shakes of that".

JP has been rocking homemade chex mix ever since we met. It's his thing. Every football season, you can expect to find JP clutching a big, overflowing bowl of this savory mix planted on the couch for at least two Sundays. It's tradition.

Why This Party Mix is Different

Talk about mixing things up. Yup, I just did that.

Like I mentioned, this chex mix seasoning has fewer ingredients. Only TWO! It doesn't get any easier than:

I always thought it was weird because the classic chex mix recipe (see below) has worcestershire sauce and some other things in it, but trust me, you'll love the simplicity of this and the killer flavor!

The Nuts and Bolts

Making this mix is super easy. We use an uncovered electric skillet. Maybe because we're old school (or that's what my MIL used) but I've come to find you do have more control. You could use your oven on a super low convection setting like 225° but it'll take a little longer.

How Far in Advance Can You Make Chex Mix

Up to 3 days in advance of when you plan to serve it. I'd advise making extra because there's a definite "eat as you cook" habit that needs to be factored in.

After you're done cooking it, leave the party mix in the bowl to cool. Once it's completely cool, you can store it in an airtight container or Ziploc for up to 3 days. After that, it loses it's crispness.

But there's no shame in still eating it.

Can i Make It In the Microwave Instead?

Sure, why not? Use what you got. I personally haven't tried it yet, but the Original Chex mix recipe is made in the microwave. Just don't overcook it or you run the risk of a "stale" texture.

For a few: This recipe easily can be cut in half for a smaller number.

For a crew: Serve up individual servings in small cups for a party or small gathering. Can easily be doubled or tripled for a larger group. 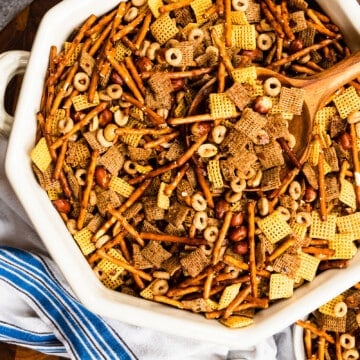 Can easily be halved, doubled or tripled depending on the size of your crew. Optional add-ins: Microwave Instructions: You can microwave the mix for about 5-6 minutes tossing halfway through.  Make Ahead / Storing Tips: The mix can be made up to 3 days ahead. Cool completely before storing in an airtight container or Ziploc.
Course: Appetizer, Snack
Cuisine: American
Author: Lori Murphy
Did you make this recipe? Tag @josieandnina or tag #josieandnina!
Appetizers & SnacksFallOne-Pan Meals