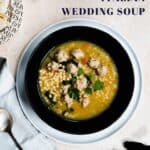 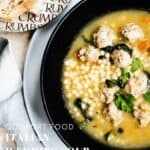 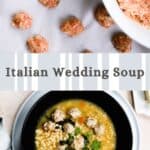 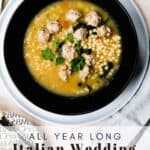 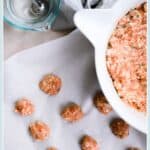 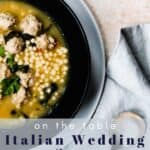 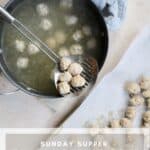 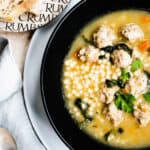 You don't have to have a wedding or be married to make (or eat) Italian Wedding Soup. With a stracciatella twist, this soup is a big bowl of comfort. Pairs so well with my Italian Arugula Salad.

It seems very few restaurants serve Italian Wedding Soup. Whether it's because it's too rustic, or someone thinks it too time-consuming (to make, not eat), you might agree that it's just plain disappointing. What could be better than mini meatballs and baby spheres of pasta co-mingling in a bowl of amazing broth? Adding a stracciatella finish!

With a handful of vegetables thrown in for health and wealth, you've got all the things one wishes on a married couple. It is said that Italian wedding soup was given its name because the ingredients are married together: as in the broths from the meat and vegetables cooking. Hence, the married broths — or minestra maritata (not to be confused with hakuna matata)—of the cooking liquids of the meats and vegetables.

Let's break it down. Here are the traditional components of the recipe: 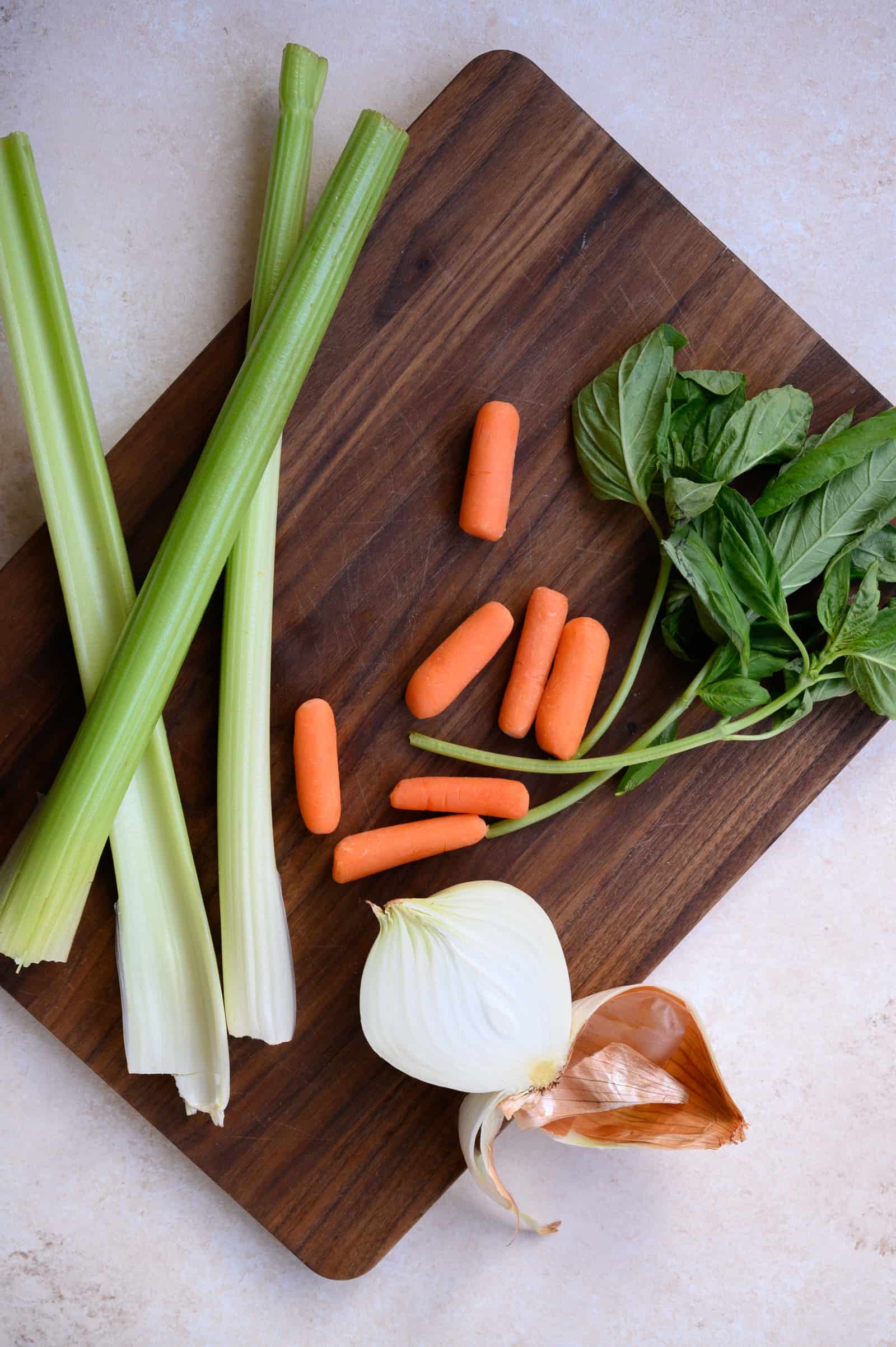 Now how those ingredients are sourced (as in beef, pork, chicken) or blended varies from region, country or even family. But then again, isn't that the case with most recipes? Or most marriages? You and your significant other can debate that...over a bowl of this soup, of course. 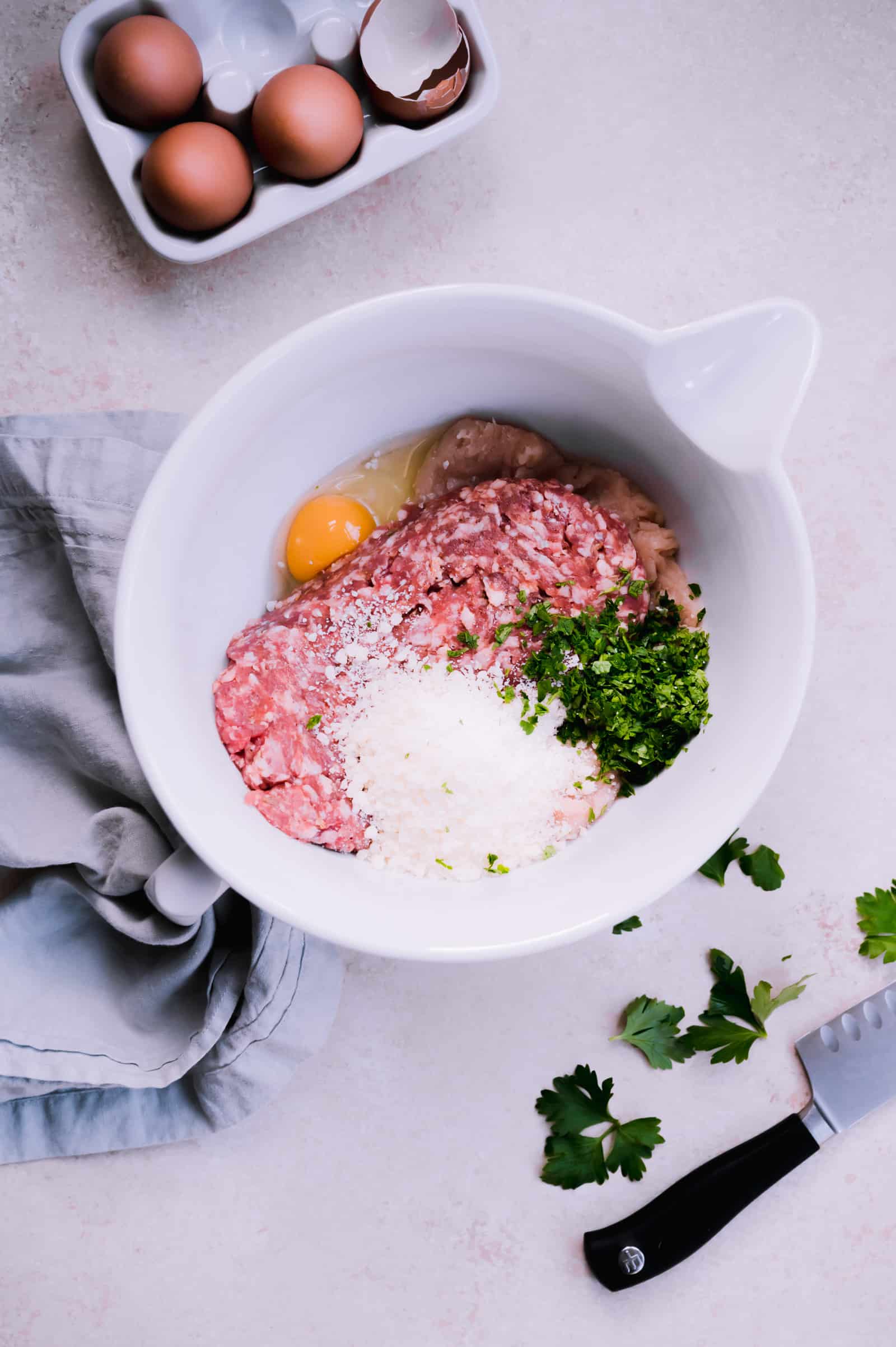 Meatballs -The favorite part of this soup has got to be the meatballs, amirite? Whether it takes one back to the mini-meatballs you could get from a certain school lunch spaghetti or no,t I don't know (because we weren't allowed to eat canned spaghetti in our house growing up...bitter much?) OR whether it's because they are kind of like the inside of soup dumplings in Chinese cuisine, I'm not sure. Or maybe it's some other reason such as being unbelievably and soulfully GOOD.

The meatballs in this recipe are made from two kinds of meat: chicken and pork. Could you use beef instead of chicken? Sure. I won't stop you. My grandmas wouldn't stop you. Just give the original recipe a shot before you decide. If you have to have beef meatballs, give these meatballs a try (but cut the recipe at least in half because it makes a lot).

Pasta - Traditionally, you would use acini di pepe for Italian Wedding Soup. If you have a box of orzo or pastina in your pantry or some other really small pasta, go for it. And then refer to the paragraph above regarding my grandmas and permission and such. It's all good.

Broth: Because I am using chicken in my meatballs, chicken broth makes the most sense. Could you use beef broth in your soup? Totally. But don't use only beef broth. Add some chicken or vegetable broth. It is a wedding after all. And since you're asking, I'd use more chicken than beef (say if you had some leftover of one or the other you needed to use  up).

Greens: You'll notice that I used spinach here. Escarole is the most traditional which I would have used. However, it's a long story involving a grocery clerk insisting that what I had in my hand was escarole when I felt pretty confident it wasn't. I trusted him, It wasn't. Minestra maritata.

Ok— on to the good stuff...getting all these ingredients good and married. 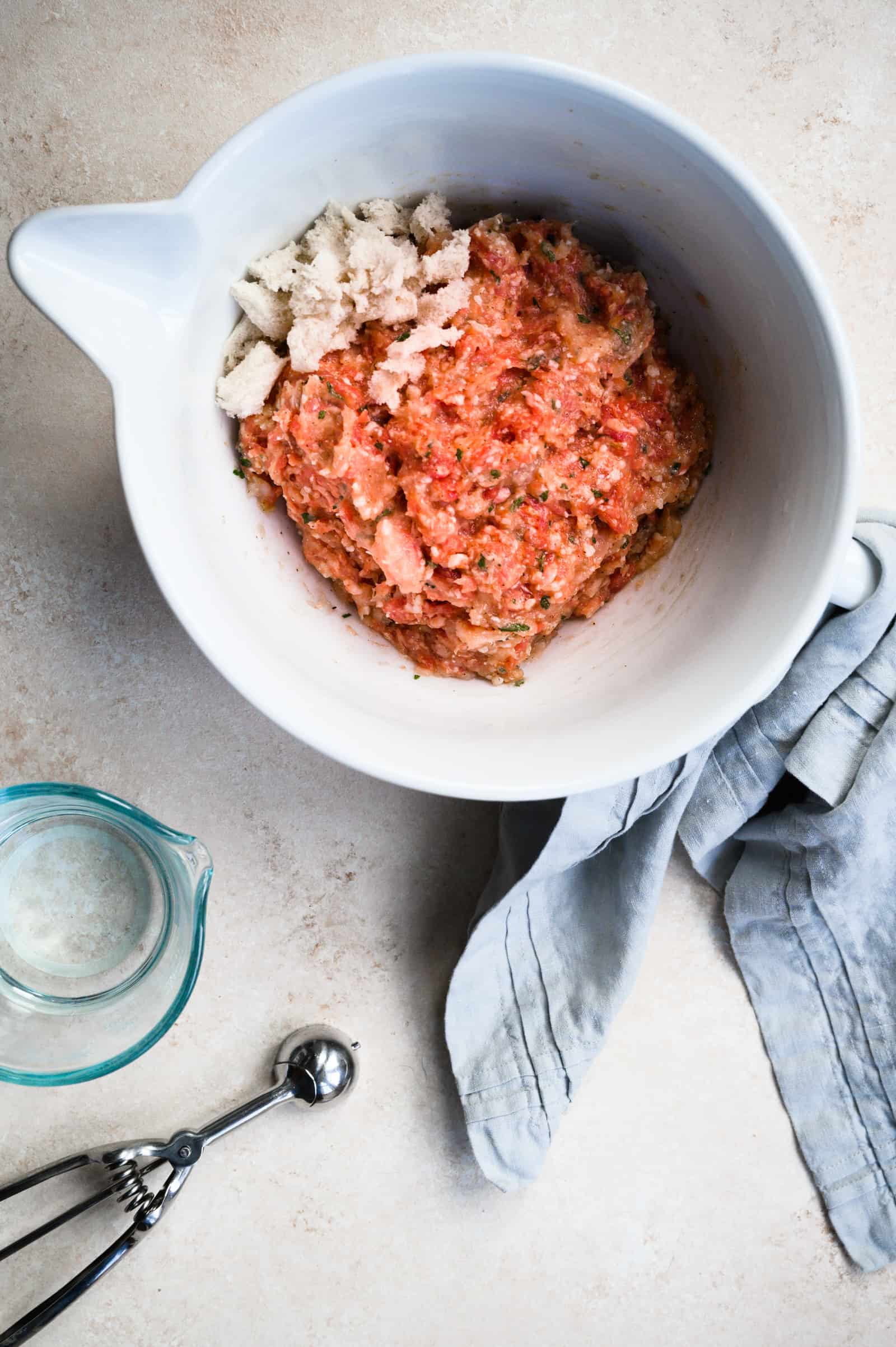 You'll want to use a large bowl and your favorite kitchen tool - your hands. That's how you can feel the texture. First, blend the meats together so that you know they're good and incorporated. Next, add all the other meatball ingredients to the bowl EXCEPT the water. You want the meatball mix to be on the looser side but you need it to hold its shape. A lot depends on the amount of fat in your meat and the grind of the chicken. If you have a butcher who grinds chicken for you on-site, that's the way to go. You won't have as much moisture because a lot of time the meat is shipped frozen to the store leading to more moisture in your meat mix. FYI—if you have a Fresh Market store in your area, they usually will grind fresh chicken right from the butcher case and it's so worth it. 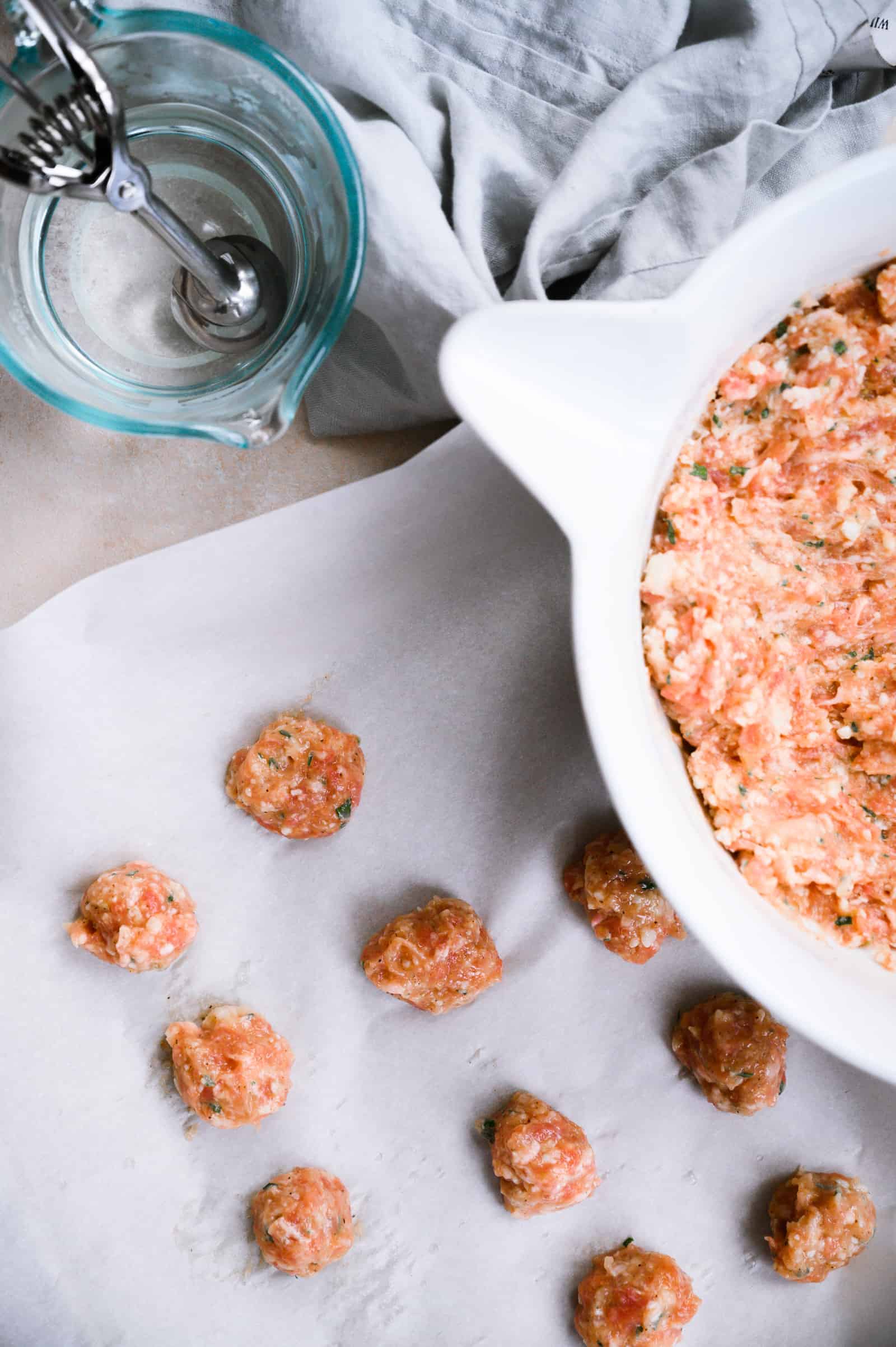 To shape the meatballs, use either a small melon baller or just your hands. You want about a 1" meatball. Lightly roll it into a ball and place it on a cookie sheet. Keep going until you use them all up. 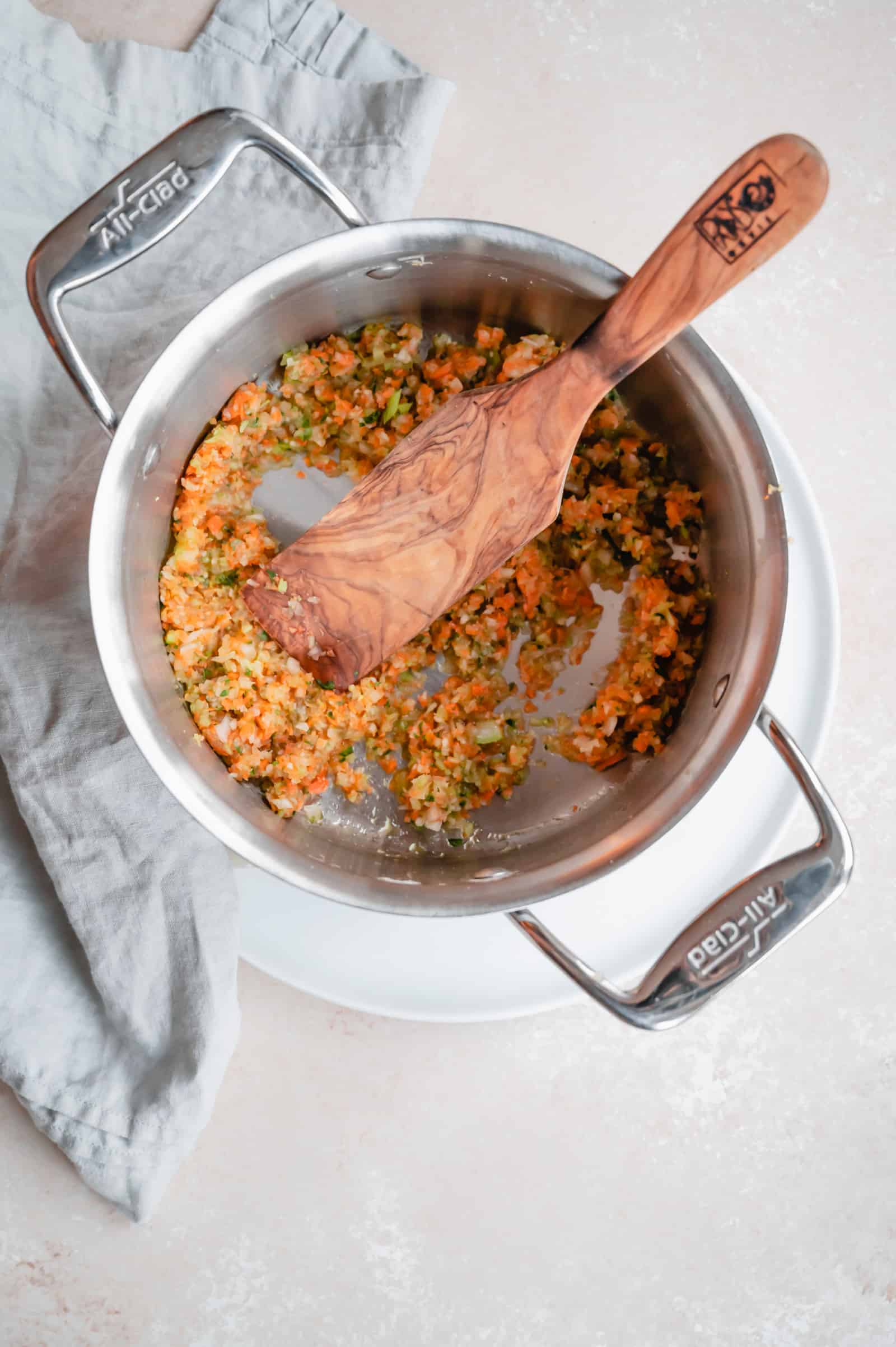 Having a food processor for this step is going to save you some time. If you don't, that's ok! There are directions in the recipe for each. Either way, you are going to end up with some minced veggies that you are going to quickly saute in a hot pan. To that, you'll add the broth and deglaze the pan. (Deglazing is just scraping up all the brown bits at the bottom which is where the flavor is). 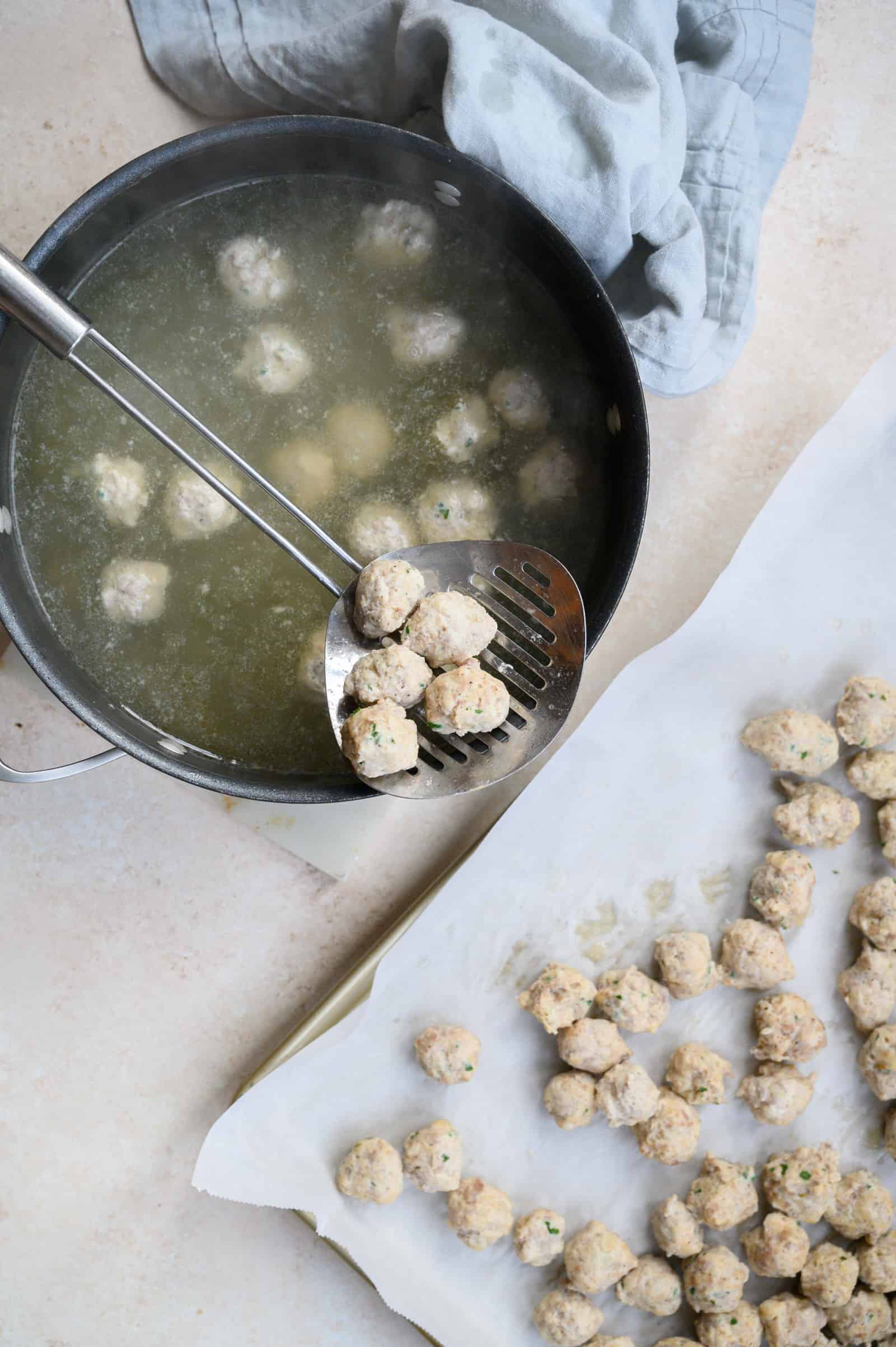 In another pan, you're going to heat up some broth and add your meatballs. You are essentially poaching the meatballs and will finish cooking them in the other pot. After poaching them and straining the water, add them to the other pot with where the remaining broth and pasta will have been cooking. [TIP: you can always add the meatballs and all the broth directly to the first pan. That'll definitely save on clean up. But- you won't get as clear of a broth. Entirely your call.]

Right at the end, you'll add in the spinach or escarole along with the stracciatella. 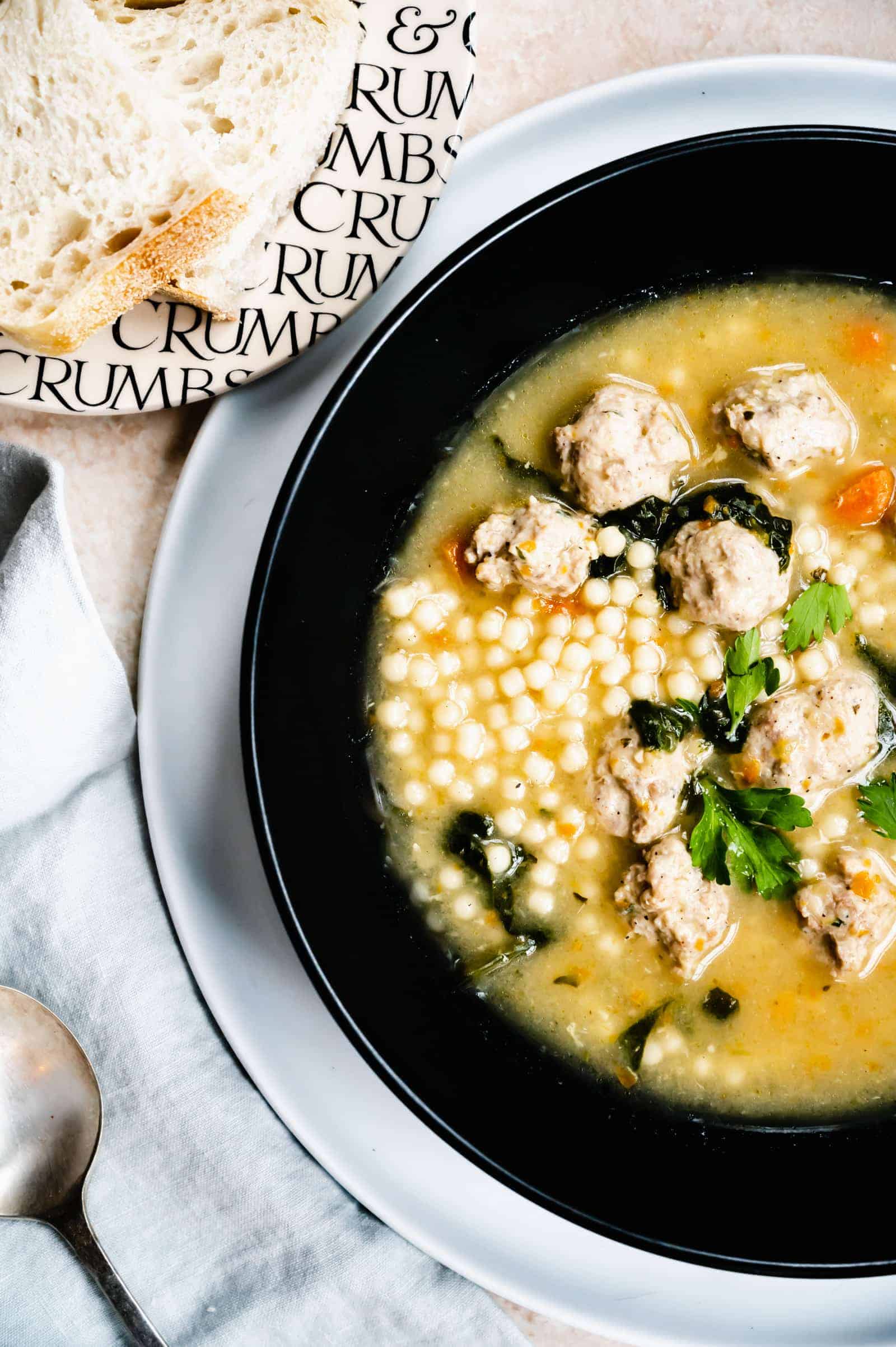 If you've been to Italy, you've eaten gelato. Every gelato shop has a stracciatella flavor which to Americans is like chocolate chip. While stracciatella soup inspired the creation of the gelato, it doesn't have chocolate in it. It's more of a chicken soup with a swirl of eggy Parmesan right before serving. The egg cooks in the broth with little cheesy strands strewn through the soup. It's magical and adds an amazing flavor layer.

Yes! There are a couple of ways to do it:

I prefer the first because the pasta doesn't get as soft

For a crowd: A lighter alternative to my Completely Steak Chili, especially if you have guests who choose not to eat red meat. Fun for your Super Bowl party!

For a few: Freeze half of the meatballs for another meal.

Make ahead: Perfect to make ahead up to two days. The soup can also be frozen. If you make extra meatballs, freeze them separately. Then you'll always be ready to have soup. 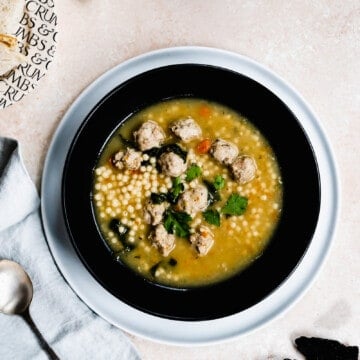 For the soup base:

FIRST STEP || WITH A FOOD PROCESSOR:

FIRST STEP || WITHOUT A FOOD PROCESSOR: