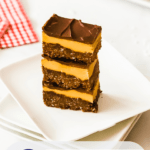 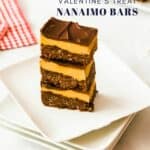 If you can pronounce it, you can make them  - or maybe it's the other way around. Either way, Nanaimo Bars are a gift from our friends to the North— a Canadian tradition that is a rich, sweet layered treat. Our version kicks it up a notch with a peanut butter filling that takes the dark chocolate, graham, almond and coconut crust to an entirely other level. 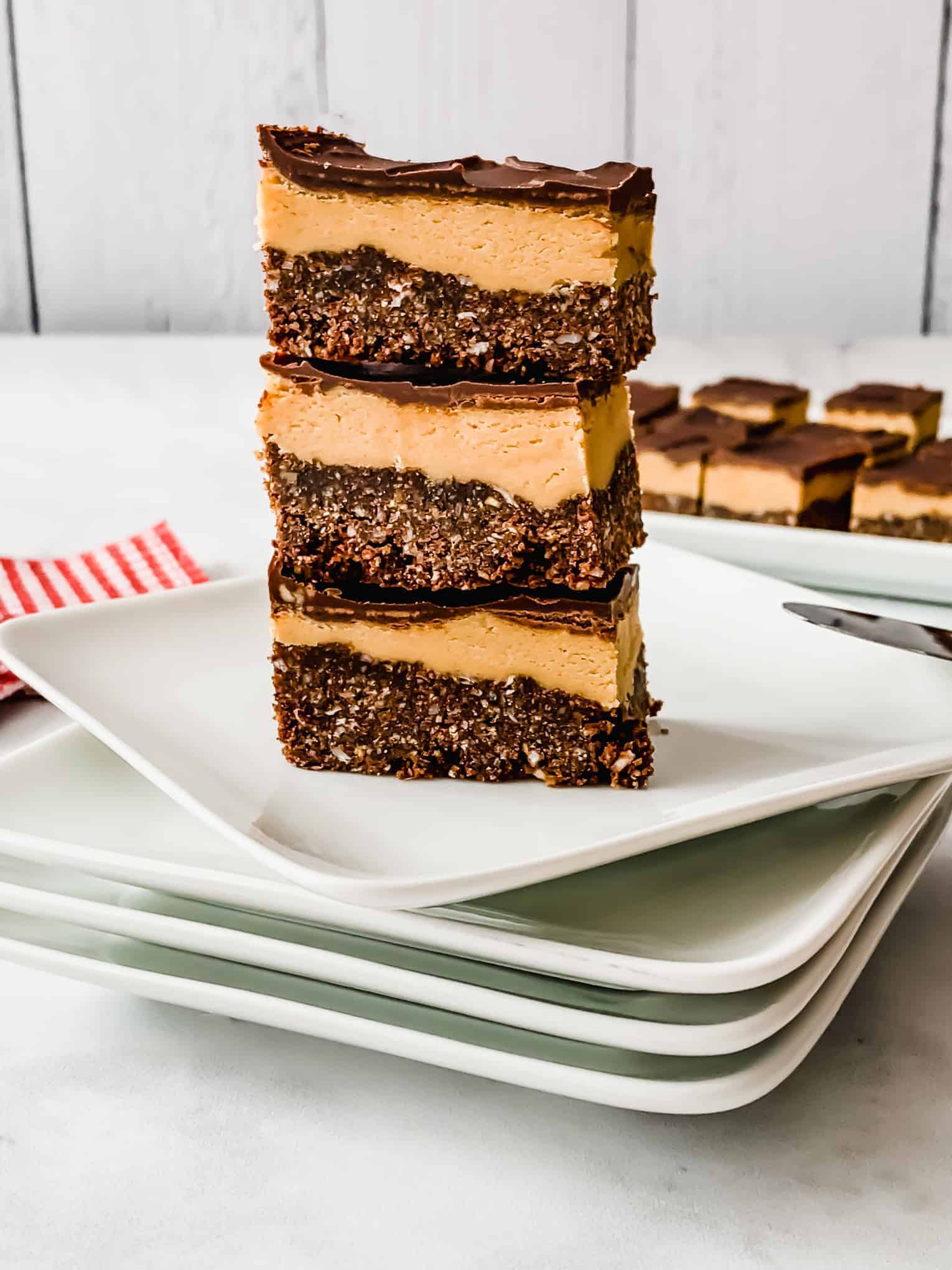 Can you say Na-nay-mo? That's how you pronounce these amazing bars from Canada. Let's get one thing out on the table right now. These have coconut in them so if you don't like coconut, then I am going to encourage you try these thumbprints or peanut butter cookies. If you do LOVE coconut, we speak the same language which is a world where everything is made of dark chocolate and coconut. I truly would never leave. These Nanaimo Bars are YES-YES-MORE. Yes, there is chocolate; yes there is coconut and I want MORE of both. 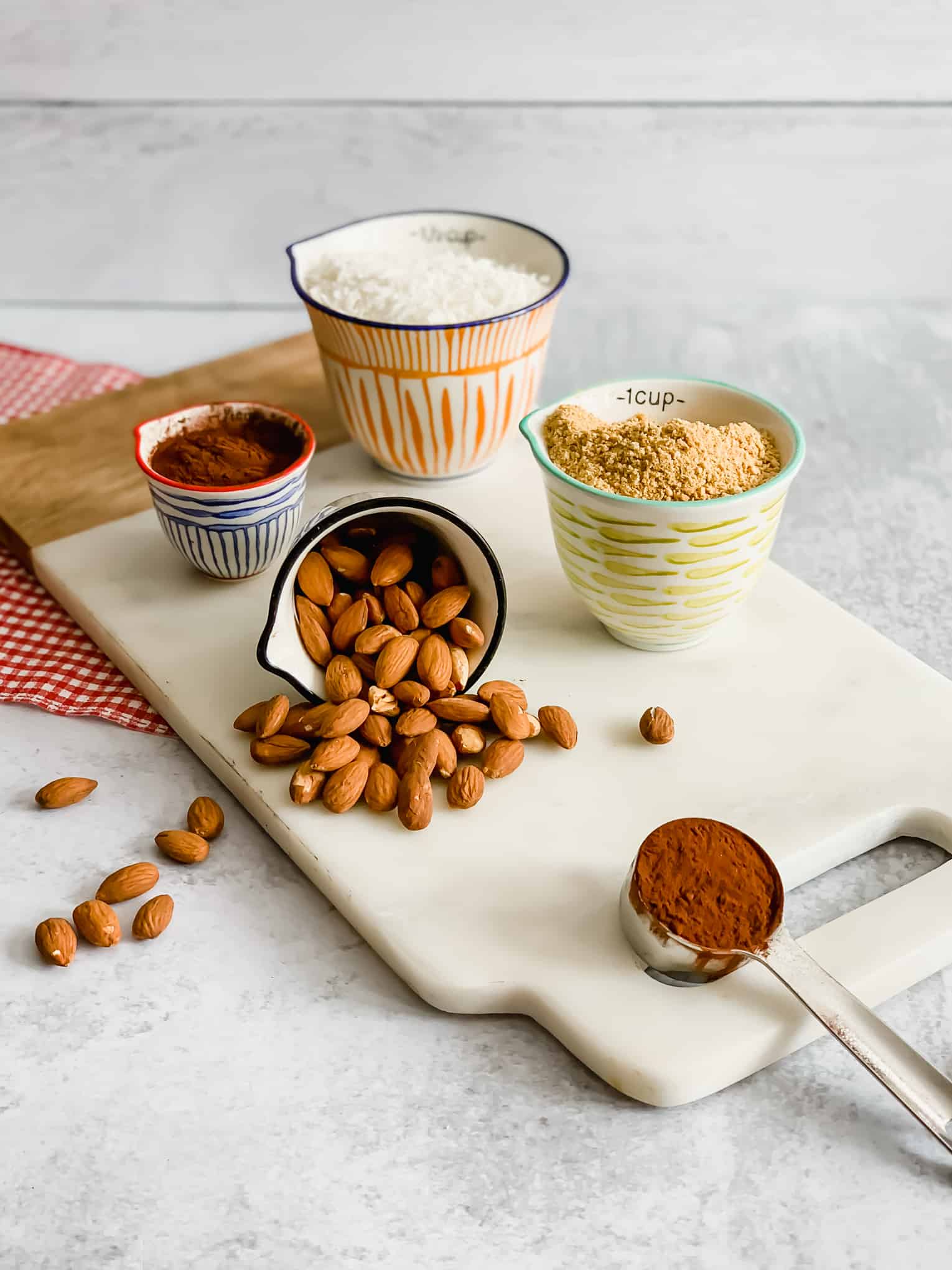 Here's the skinny. I thought about making these bars with healthier ingredients (like coconut oil for the butter) and perhaps someday I will. However, some things are just meant to be what they are. And I felt it might be a little disingenuous to butcher the Nanaimo Bar without giving it a fair shot. I did take liberties with the filling a bit as the traditional filling is pretty much a buttercream frosting. Which I know sounds a little unusual but if you think of the bars as a double frosted crust then there's really nothing to think about. Somethings are not meant to be overthought. And if you're a close friend of mine reading this: yes, I just said that. 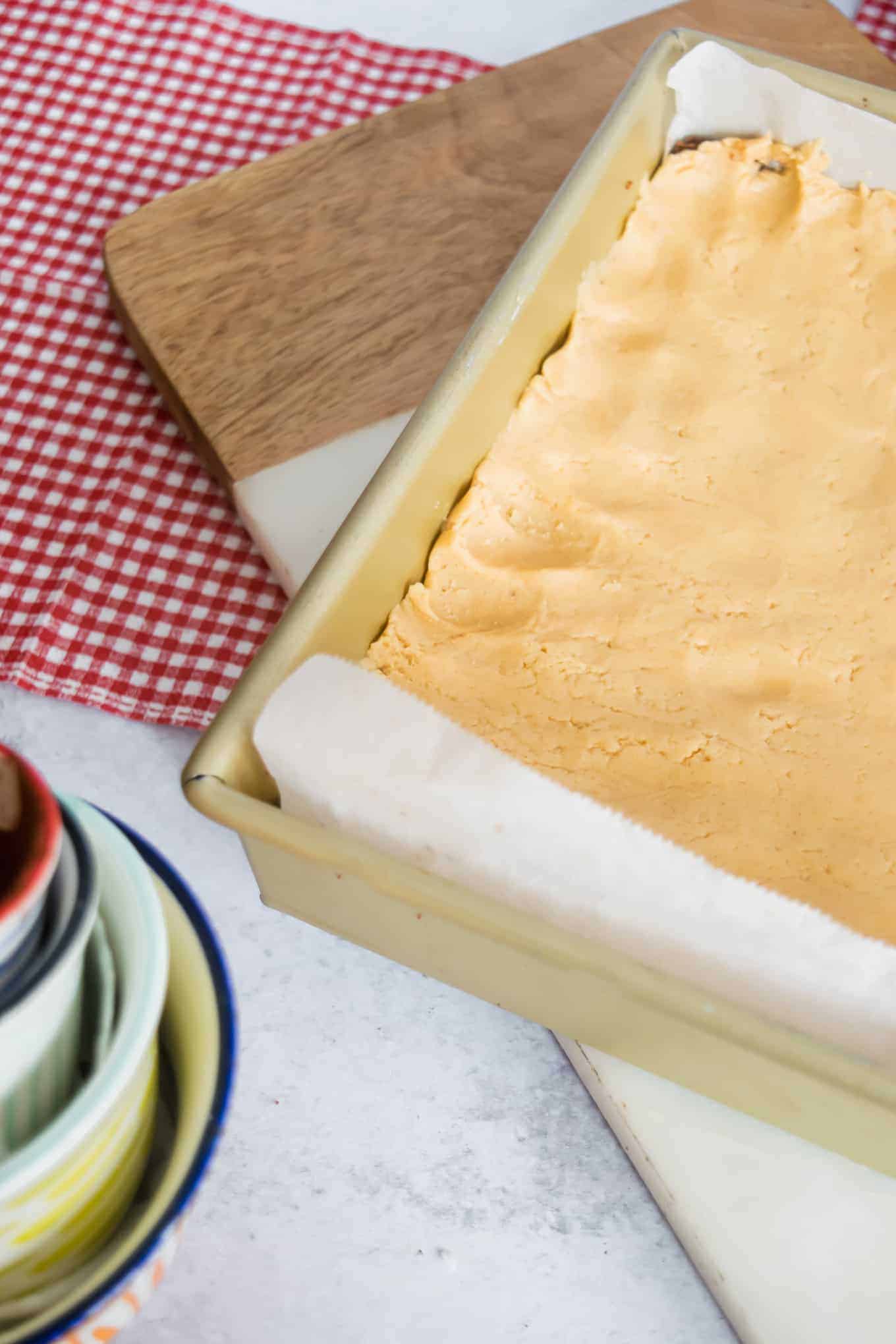 As with some layer bars, the Nanaimo has a few steps. There are many recipes out there where the entire recipe is refrigerated in layers. I chose to bake the crust a bit to give it a firmer base and then refrigerated it for a bit but a word of caution: if you bake it too long, the thick peanut butter layer will not easily adhere to the crust. The crust is quite thick. I prefer a thick crust because I like something to hold on to and I want to really taste the almonds, coconut and chocolate in there. You can use a larger pan but your peanut butter layer will be on the thinner side which I also don't love. You choose. Mo' crust, Mo' filling - Mo' better.

Speaking of the peanut butter filling, this would be awesome on top of a cupcake. I'd thin it out a bit with a little more milk. My version here gives you the option of milk vs. cream and full disclosure,I did use cream because I was out of milk. Bad planning on my part. But sometimes these things happen. You can use any kind of milk you want but keep in mind the taste might be altered a bit. Give it a whirl and let me know. 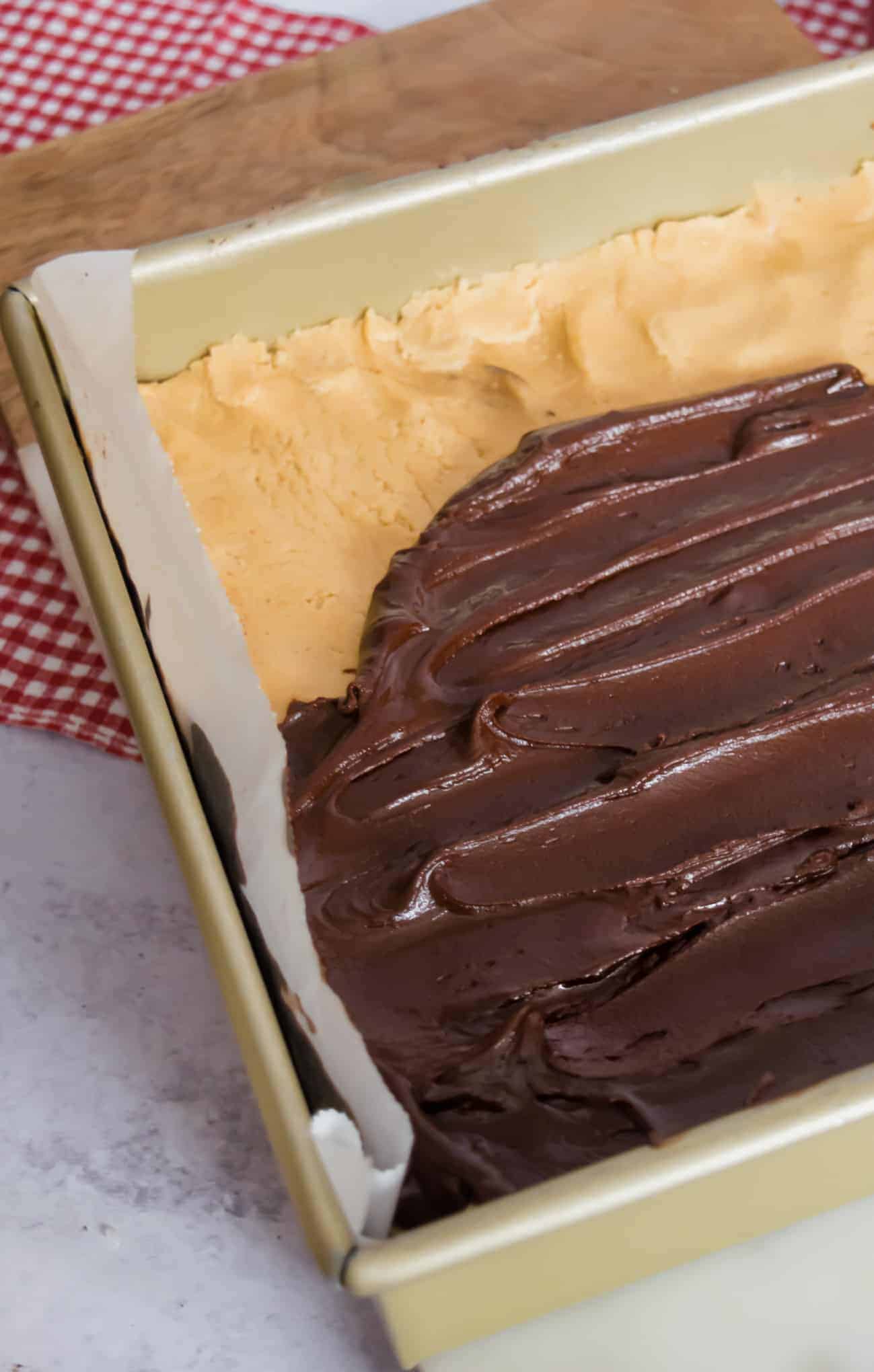 Finally, the chocolate on top. I have been experimenting with different chocolate chips and used the Trader Joe's ones in this recipe. I love their chocolate chips; however, I have found they don't melt as easily as Nestle's. I use the 30 second method in the microwave where I stir every 30 seconds and with the Trader Joe's I find I have to use a little hot water to loosen things up a bit even with the conservative melting technique. Certainly, a double boiler would be a good alternative but it's one more thing to clean and can't go in the dishwasher. There's a pattern here with the shortcuts  - maybe the whole post should be named FULL DISCLOSURE. 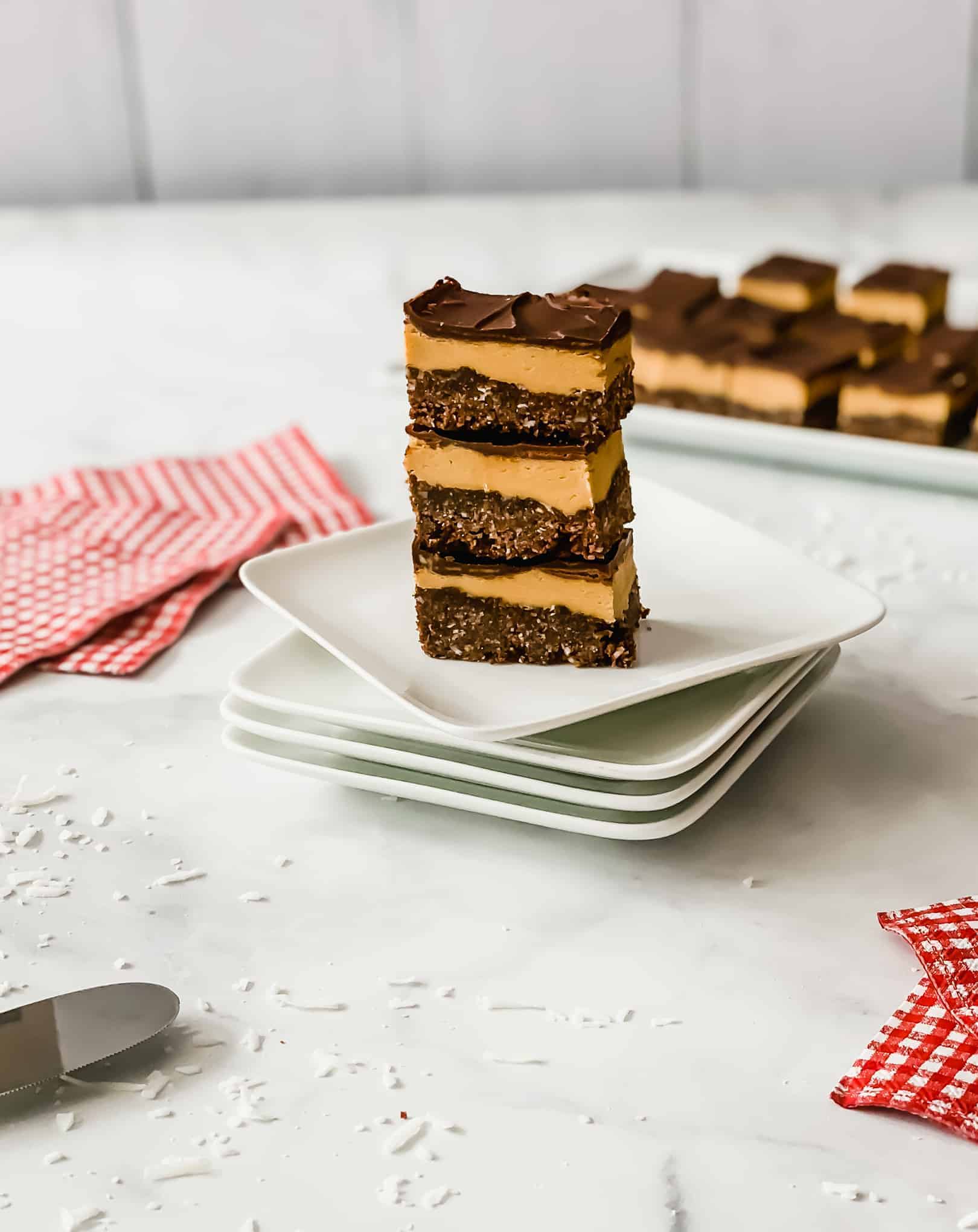 Regardless of how you make them or name them, Nanaimo Bars are a bite of heaven. The graham cracker, almond, chocolate and coconut crust has a really great rich but clean texture and taste. And the peanut butter filling and chocolate ganache send it right over-the-top to amazing. The best thing is you can cut them really small because it doesn't take much to be satisfied. Trying to stop at one is the dilemma. Full disclosure.

ONe pan is plenty because you can cut these lovies really small.

Make them to share with your loved ones because they are decadent and be sure to save some for yourself!

Make the filling as a frosting for cupcakes. 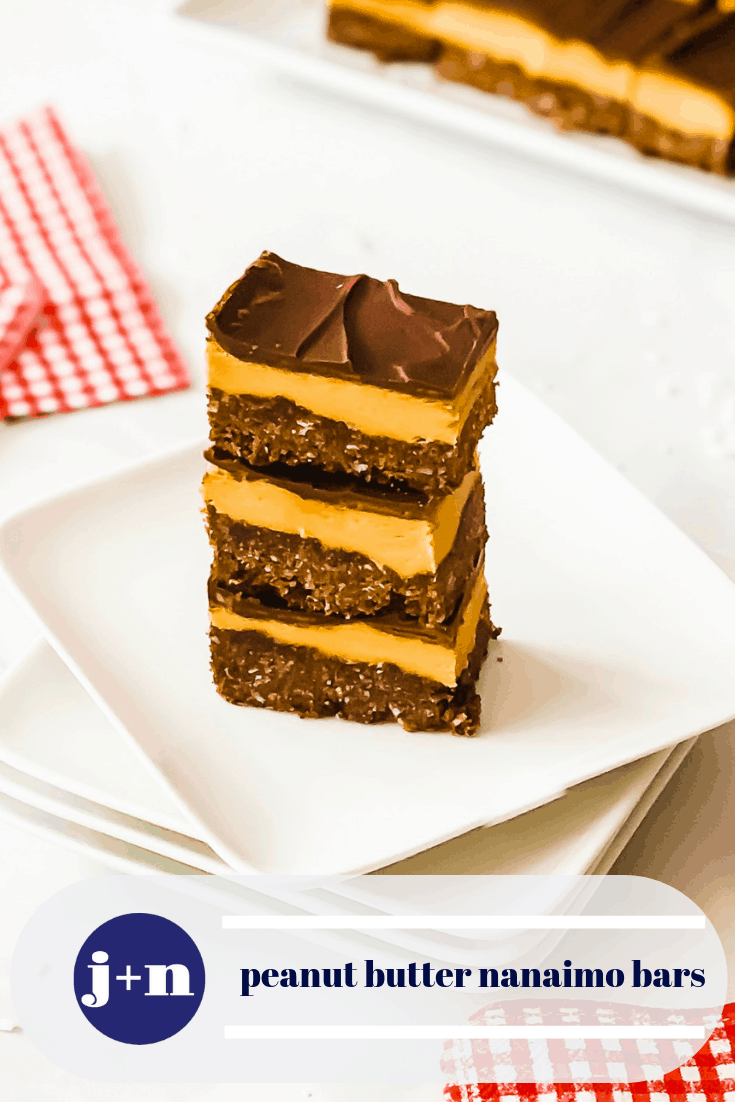 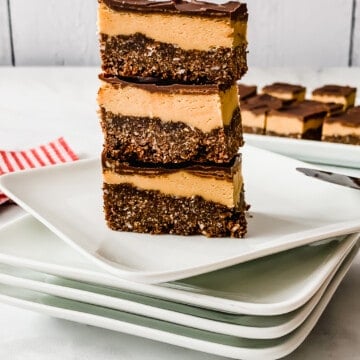 Print Recipe
A thick layered bar traditionally from Canada. Our version is built on a crust of graham, almonds, chocolate and coconut and a peanut butter filling that brings it all together. And the chocolate ganache sends it right over the edge.
Prep Time:20 mins
Refrigeration:2 hrs
Total Time:20 mins
Pin Recipe Share on Facebook Share by Email

For the Peanut Butter Filling

For the Chocolate Topping

Bring to a Summer Party