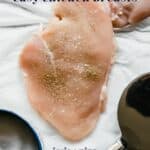 Yes, you can have the perfect cooked chicken - every time. This is one of the first recipes I teach my college-aged kids when they are living on their own because it sets the stage for so many recipes. Makes your favorite chicken salad or enchilada recipe a breeze. Recipe adapted from The Kitchn.

I don't know about you but I have grilled, baked, poached and crock-potted (a new word I've coined) more than my share of chicken breasts, with not consistent or great results. Frustrated, I took to my internet machine and literally stumbled upon this version. I've made this so many times from memory so my version may vary a tich.

There are a few rules:

Ready? Let's do the damn thing.

First, make sure you have some parchment or wax paper. I am a big fan of Costco's parchment paper that is typically sold during baking season (i.e. holidays) and when they have it, I buy two or three to have on hand for the year. Wax paper works great too. Just don't use paper towels - they won't hold up and you'll end up with little "threads" in your chicken. YUCK. Pull a piece of paper long enough to lay your chicken on and then cover. So twice the size you need.

Wash and dry your chicken and lay it on one side of the paper and take the remaining half and pull it over the chicken to cover.

Now for the fun part especially if you've had a long day with kids, husbands, co-workers or a dog that likes to bark at the world (I'm talking to you, Maddon). Grab either a meat tenderizer, a glass or a skillet and POUND those chicken breasts. This is better than therapy. You are trying to even them out so that the thickest portion is closer in depth to the thinnest. The chicken will grow quite a bit but don't go too crazy because they have to fit in the pan.

Now, grab your salt and pepper and generously season the side facing up. You'll season the second side once you lay them in the pan. After pounding and seasoning, they should look like this:

Speaking of the pan, heat it up and add your olive oil. Place the chicken breasts seasoned side down and season the other side.

Set a timer for 1 minute or alternatively, count to 60. Or say the Pledge of Allegiance six times. After one minute, flip the chicken over one at a time and grab a tight fitting lid, put it on the pan and leave it there. I repeat: LEAVE IT THERE- for 10 minutes. Pretend it's super glued to the skillet. DO NOT PEEK. Set a timer so you don't blow it. I believe in you.

Once the 10 minutes are up, DON'T remove the lid but instead turn off the heat and set your timer for another 10 minutes. AGAIN, go do something for 10 minutes that involves you not peeking. Maybe check out this recipe or my hometown.

After the second 10 minutes are up, you get to remove the lid to the most beautiful, luscious chicken. I dare you not to eat a bite or two.

Do you have a favorite recipe that would work with Foolproof Chicken? Make it and tag us on Instagram and let us know in the comments! 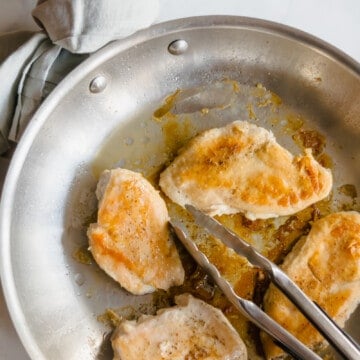