Admit it. Not everyone in your life loves chocolate. There are some people who just gravitate towards desserts that are more—well, vanilla. Like creme brulee, shortbread cookies, vanilla ice cream. And one of the best things about vanilla? It pairs well with so many other ingredients and flavors.

Both the vanilla AND the chocolate lovers in your life will have something good to say when you serve these up. That's because the vanilla base is rich with brown sugar and toffee pieces yet it's amped up with three (!) kinds of chocolate. But before we get into all the good stuff in here, let's clear some things up about blondies.

Can blondies have chocolate?

Let's settle this once and for all. Blondies can have chocolate. White chocolate, dark chocolate, extra dark chocolate, semi-sweet or milk. No question: blondies do some of their best work of satisfying when chocolate is part of the story. And this recipe is loaded with THREE. KINDS. And that spells V-I-C-T-O-R-Y.

Another area where the blondie differs from the brownie is texture. These White Chocolate Chip Blondies have that magical soft center that speaks butter and butterscotch all at the same time. Using only brown sugar plays a big role in the flavor (and makes it an authentic blondie) while the toffee bits give a little unexpected crunch.

So what other ingredients make these blondies extra special?

Now the trickiest part of making this recipe is getting it in the pan because of how sticky the dough is.

That is actually a good thing for the "licking the bowl part" that comes later. But not a good thing if you're actually trying to get the blondies into the pan and bake 'em.

What's a blondie maker to do?

I find the spoon and plop method to be the most efficient way of spreading the batter (dough? - hmmm, which is it? Sounds like a post for another day).

Back to the spoon and plop....

Now—to figure out the difference between dough and batter. Have one of these bars while you think about it.

Here are a few add-ins that would be right at home in this recipe: 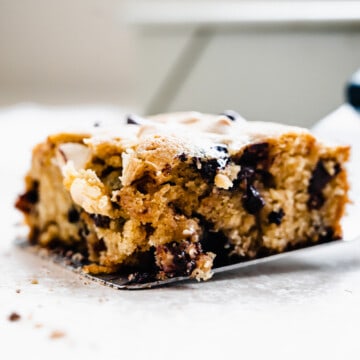