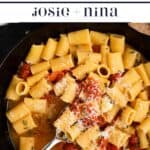 Cook pasta right in the sauce —all in one pan. This One Pan Pasta Recipe solves the problem of what to put on pasta when you have no sauce. Cook the pasta in a sauce of fresh tomatoes, a little onion and sliced garlic for an easy weeknight dinner. You'll be eating in under thirty minutes! Inspired by Martha Stewart.

A while back —so far back it was pre-Pinterest or smart phones —I came across a one pot pasta recipe from the Queen, Martha Stewart (I know she's not everyone's cup of tea, but you can't deny she knows her stuff). I shoved said recipe into a big accordion file where it sat but never quite left my mind. The idea of pasta cooked in sauce was something I always wanted to try but was contrary to everything I learned from the real Josie and Nina. It took a whole house move to resurrect this idea and now that I've done it, I just had to share my version of One Pan Pasta.

Cook pasta right in the sauce

You are smart. You know why this sounds like a good idea. But let's be honest...boiling water and making pasta is easy, right? Perfect example is this Lemon and Garlic Bucatini. So why should we want to make pasta without sauce?

What kind of pan do I need?

Any wide skillet with high sides and a lid will work but the key here is higher sides to accomodate for all the liquid needed to cook the pasta. Here are some options:

Speaking of cooking the pasta, let's get down to shapes and sizes.

Best type of pasta for a one pot recipe

If I recall (and I purposely didn't consult Martha's recipe because I wanted to just manifest her 😉), Martha used a spaghetti noodle. I used rigatoni because I really like al dente pasta (which means to the tooth) and thought it had a better chance of staying that way while absorbing all the great flavors. Other ones to try:

Cook pasta in the sauce

Assemble all of your ingredients and let's make some pasta.

What if I don’t have fresh thyme?

You can use dried but use just 1 teaspoon. Or use basil instead. Or leave the herbs out all together.

Can I leave out the wine?

Absolutely! For a little acidity, add a few squeezes of fresh lemon juice.

Can I use canned tomatoes?

Sure thing! Mutti makes a canned cherry tomato that would work great here. While I haven’t used a whole canned tomatoes for this recipe, I think they’d work as well.

Best made before serving but I get that when the craving hits, it hits.

In an airtight container for 2-3 days.

This dish is best enjoyed and made all in the same day. 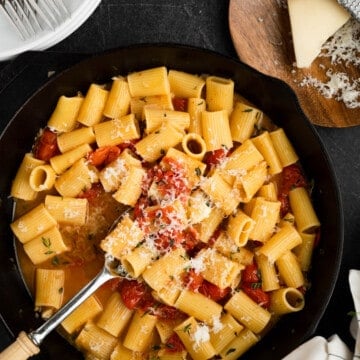 One Pan Pasta with Tomatoes and Garlic

To make the recipe vegetarian. Substitute vegetable or mushroom stock. If you end up with two much liquid. The broth to pasta ration is roughly 1:1 but keep an eye as it cooks. If there appears to be too much sauce, remove a ½ cup liquid and mix in a small bowl with 2 teaspoons of cornstarch until all the lumps are removed. Pour back into pot and stir until thickened. Pasta substitutions. I prefer a thicker noodle. If using something smaller and daintier (i.e. elbow macaroni, cook for less time). Wine substitutes. Use a couple of squeezes of fresh lemon right before serving.  Canned tomatoes. If you don't have fresh grape tomatoes, these canned cherry tomatoes from Mutti would work.
Course: Dinner, Main Course, Side Dish
Cuisine: Italian
Author: Lori Murphy
Did you make this recipe? Tag @josieandnina or tag #josieandnina!
« Honey Sriracha Salmon Salad
Pepper Jack Cheese Dip »